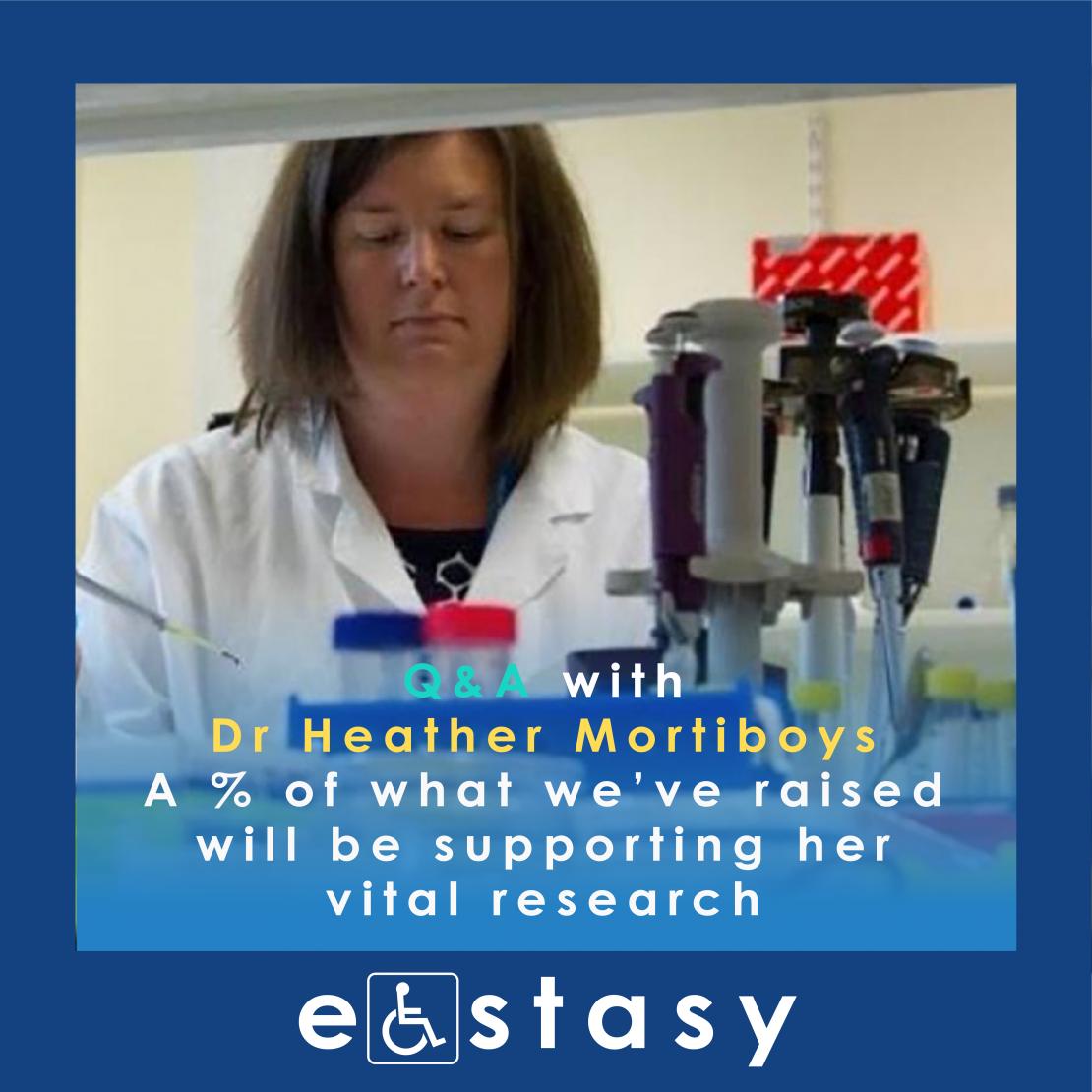 From the start we've wanted to not only make an amazing movie but support Parkinson's research too. Last time on our crowdfund money raised went to the cure Parkinson's trust. This time it's going to Dr. Heather Mortiboys who is working on some vital research at the University of Sheffield. She's dedicated her entire career to Parkinson's and we thought we'd do a Q & A with her. But before we get there, thank you once more for everything you have given to this, your support has meant the world to us and the more we raise the better a film we can make. £10k is the minimum required and we're 98% funded which is incredible. Please share our crowdfunding campaign and story one last time with everyone you know.

Hello Heather, we’re SUPER excited that a percentage of our crowdfunding efforts will be directly going towards your research into Parkinson’s at the University of Sheffield. How did your journey into Parkinson’s research begin?

I was in a lecture in the last year of my undergraduate degree, the lecturer said that although our knowledge had increased a lot into understanding what happens in Parkinson’s, there were no treatments. I really couldn’t understand this and from that moment onwards I have pursued a research career in Parkinson’s research. I really wanted to understand how so much more knowledge could be gained without adding to new treatments for people with Parkinson’s.

What will your research be looking into?

Broadly my research team focuses on two aspects of Parkinson’s; one is to clearly understand the cellular pathways causing the brain cells to stop functioning and die; whilst the other aspect is to use this information to find drugs which can boost those same cellular pathways. This PhD project actually has both aspects in it. We already have found out a lot about certain pathways causing Parkinson’s, problems with the batteries of the cells, the mitochondria and problems with the recycling system of the cells, the lysosomes. Importantly we have also found some drugs which can act on these pathways. This project will use skin cells taken from people with Parkinson’s to investigate in detail which pathway(s) is causing their Parkinson’s and then test the drugs (on the cells) to see if they have improvements. We will use the skin cells but actually as it is brain cells that are affected in Parkinson’s we will use a groundbreaking technique and change the skin cells into brain cells.

How much work and research goes into a process like this and who else do you work with to understand more and hopefully get a breakthrough.

Research is a long process; it takes a huge amount of work from lots of different people. One aspect which is key is researchers and clinicians working together; this is something that Sheffield is particularly good at. We have a world leading translational research facility in Sheffield Institute for Translational Neuroscience, which is linked to the Biomedical Research Centre (the aim of which is to bring through discoveries made at the bench to the clinic) and then of course very close links with the Sheffield Teaching Hospitals Trust. This project will be co-supervised by myself and my clinical colleague Prof Oliver Bandmann. We are also actively working with industrial partners to accelerate the finding of compounds which target these cellular pathways as well as other scientists which specific expertise.

My Dad’s had Parkinson’s for over 20 years and we keep as up to date as possible on treatments and breakthroughs. It feel like there’s so much work in different fields, gene therapy, DBS, improving the efficiency of current drugs, drug repurposing even looking at proteins in the gut. How does your research compare to this?

You are absolutely right, there is a huge amount of work being done on Parkinson’s and in many very different areas. Some work focuses on trying to alleviate the non-motor symptoms of Parkinson’s, others investigate how Parkinson’s starts and how to track it in individual people. Our research fits within all of the other work, our ultimate goal is to get to a drug which can slow or even stop the progress of Parkinson’s. This is a very challenging goal, all the research areas feed information into each other, giving us more insight into Parkinson’s and sharing of information, ultimately allowing research to progress faster in all areas. If a drug is found which can slow progression, we need to know how to track someone’s Parkinson’s, we need to know how to detect and diagnose Parkinson’s earlier.

Separately what are you looking to raise in total and what for and how can people look into your work further, potentially donate and keep up to date with your progress?

We are looking to raise a total of £160,000 to fund a PhD studentship. This will fund the student's stipend and all of the laboratory reagents, chemicals and work which is needed for this project. More information is available from https://www.sheffield.ac.uk/giving/causes/research/fighting-parkinsons-together This also contains information on how to donate. The University is updating information on progress and I am also in contact with some people who have donated to keep them up to date with research progress.

A lot of people and charitable foundations do feel strongly that this condition is curable, what sets Parkinson’s apart from other conditions and allows us to even talk about the prospect of a cure.

This is a very tough question; yes people do feel strongly, myself included this is a curable condition. I think part of what sets it apart from other conditions is the distinct cells which are predominantly affected. This condition does not affect every single cell in the body, there are certain cell populations which are particularly affected. This means we know we have something to target.

Parkinson’s isn't hugely seen in the media, considering the amount of people worldwide who have it. We remember vividly the hope that the BBC Panorama documentary Ecstasy and Agony gave us, do you know the ins and outs of the research and outcomes of the effects of Ecstasy on people living with Parkinson’s?

Parkinson’s isn’t hugely seen in the media, and I think documentaries and work being done by several of the charities to raise awareness of Parkinson’s is crucial. The documentary was very powerful. In terms of the science behind the effects of ecstasy, this is outside of my area of expertise so I have a limited understanding (in terms of detailed scientific knowledge) and therefore would rather not comment here!

Lastly, our movie is about a disabled father (with Parkinson’s) and son’s attempt to buy drugs so the Dad can dance with his wife… one last time… It’s a wild heartfelt movie with laughter and a few tears along the way. Could you imagine going on a drug deal with one of your parents? How do you think that’d go down?

Oh my goodness! I have to say I cannot imagine anything like that with my parents. I really have no idea what would happen!