The GoOdfather screens for charity on Greenlit 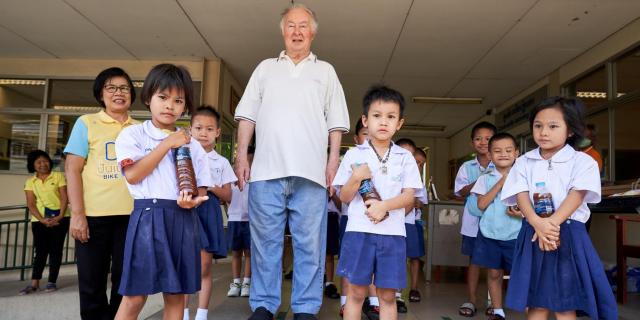 On July 11th, Greenlit successfully hosted an online screening of Riverman Management’s documentary film The GoOdfather, with all proceeds going to charity. Over £6,500 has been raised so far in its Greenlit campaign.

The film tells the story of Father Joe Maier and his efforts to open up a school and orphanage in Klong Toey, Bangkok’s largest slum community. Ticket sales went directly to The Mercy Centre, providing critical funds for the children of Klong Toey. Maier will specifically use the funds to support his organization’s fight against hunger in Klong Toey caused by the COVID-19 pandemic.

If you were unable to attend the screening, the documentary is still available for viewing on a donation basis. Suggested pledges range from £35 to pay for 100 school meals to a £500 donation that will sponsor one child for an entire school year, but gifts of any amount over £1 are accepted. All donations can be made via The GoOdfather’s page on Greenlit.

Filmed by Riverman founders Dave McLean and Alex Weston, the documentary is driven by lively interviews with Maier, who was sent to Thailand by the Catholic Church in 1972. Maier’s stories, told with constant humility, gratitude and humor, provide an unflinchingly forthright account of how his organization has battled issues related to drugs, human trafficking, child abuse, prostitution, HIV/AIDS and homelessness.

Since its founding in 1972 by Maier and Sister Maria Chantavarodom, the Human Development Foundation - Mercy Centre has served some of Klong Toey’s most vulnerable people through a myriad of programs, most notably the 23 Mercy Kindergartens from which over 60,000 children have graduated. The Mercy Centre has been visited by dignitaries from around the world, and Maier has received numerous awards for his work — including a lifetime achievement award from Her Majesty the Queen of Thailand.